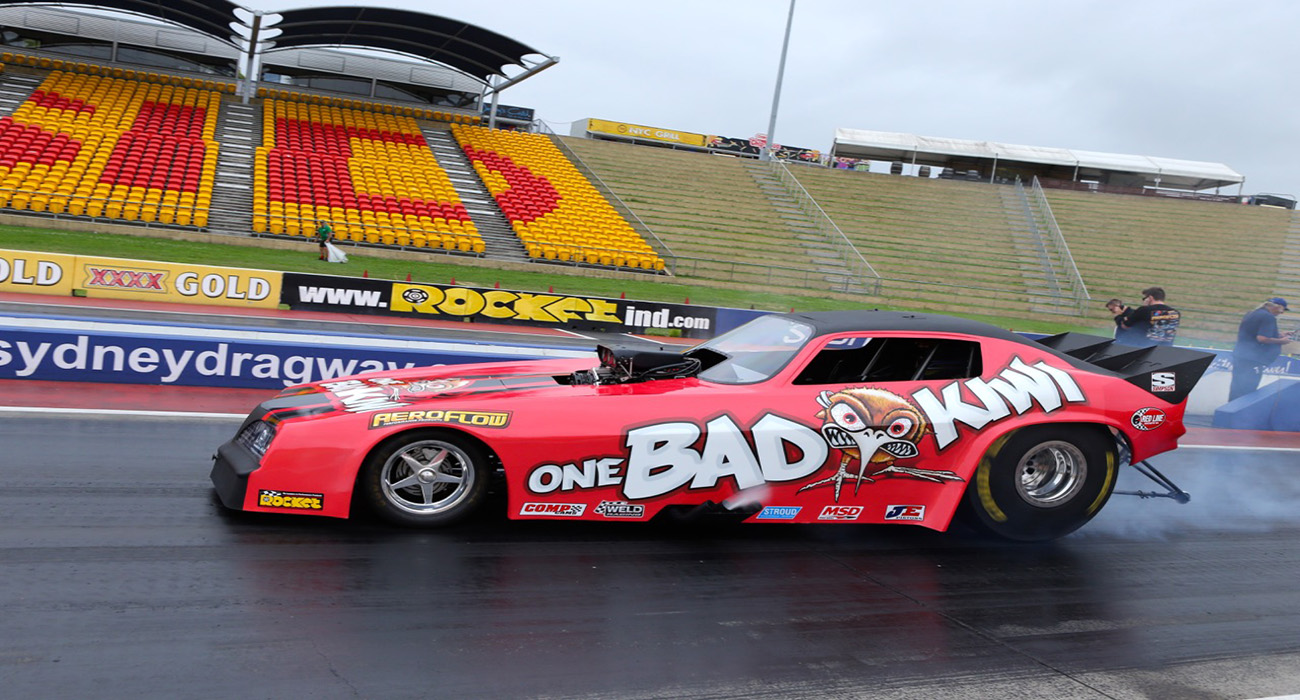 It had taken 3 rain outs over 2 years to get the Aeroflow Outlaw Nitro Funny Cars event to happen at Meremere Dragway. And for the massive crowd that turned up nobody went home disappointed. Originally scheduled for Saturday the 21st of February but with scheduled rain the event team decided to postpone until Sunday to give fans time to amend travel arrangements to attend. The crowd responded with a massive turnout coming through the gate to witness the 9 nitro funny cars and the Wheelstander finally put on a show on New Zealand soil.

The event kicked off with the Aeroflow Pit party which was a huge hit with the New Zealand Crowd. Many fans getting their first chance to see one of the cars up close. The on track action started with a huge bang with side by side 5.72s between the LA hooker and the bandit setting the scene for a fantastic event, a tiny hole shot to Josh Leahy in the Bandit being the only difference between the pair.

The Nitro Express came out and laid down a 5.68 at over 400km/h to set low et of the round, While Nitro Flashback and One Bad Kiwi both took wins while King Kong took the bye on a peddling pass. Chelsea Leahy then wowed the crowd with an impressive full track wheel stand in the Nitro Sheriff finishing of a super entertaining round. Round two action started with a wild peddle fest between Nitro Express and King Kong. While not fast, the side by side peddling 8sec pass had the crowd on their feet, with the experience of Rick taking the win in Nitro Express.

Dark Horse then ended the Bandits chance at the final with another great side by side 5 second race decided by less than 0.05 of a second. Morice Mcmillin in One Bad Kiwi now had a chance to secure his spot in the final round and that he did setting low ET of the meeting with a 5.61 seconds beating fellow Kiwi Karl Boniface in Nitro Flashback.

To finish off the round it was the father/ daughter match up of Anthony and Emma Begley. Emma Staging early to put here dad off her and it worked with a start line advantage meaning Emma’s 5.84 was enough to beat dad Anthony’s 5.7 both at over 400km/h. With the points totaled up the final round would be One bad Kiwi verse Nitro Express for the gold #1 trophy.

While The two ford mustangs, Lets Boogie and Dark horse would run off for the 3rd place trophy. Round 3 kicked off with the LA hooker showing he had one of the best race cars on the day with another 5.7 to beat local Car Nitro Flashback who was just happy to be part of the days action. Josh Leahy in the bandit then dropped a 5.64 to beat King Kong. In the first of the trophy match ups side by side 5.79s again had the crowd on there feet with the Dark horse just denying Emma Begley her first podium by the smallest of margins.

It was then time for the big one, Could kiwi Morice Mcmillin take his first series win on home soil, to do it he had to beat the winningest car in the series driven by Rick Gauci tuned by Graeme Cowin. A 5.66 at a whopping 419km/h for one bad kiwi was more than enough for a tire smoking Nitro Express. A fitting end to an entertaining event where every fan went home with a smile on there face and some nitro in their eyes. The Aeroflow Outlaw Nitro Funny cars now head to Masterton Motorplex on the 21st of March to complete the NZ tour