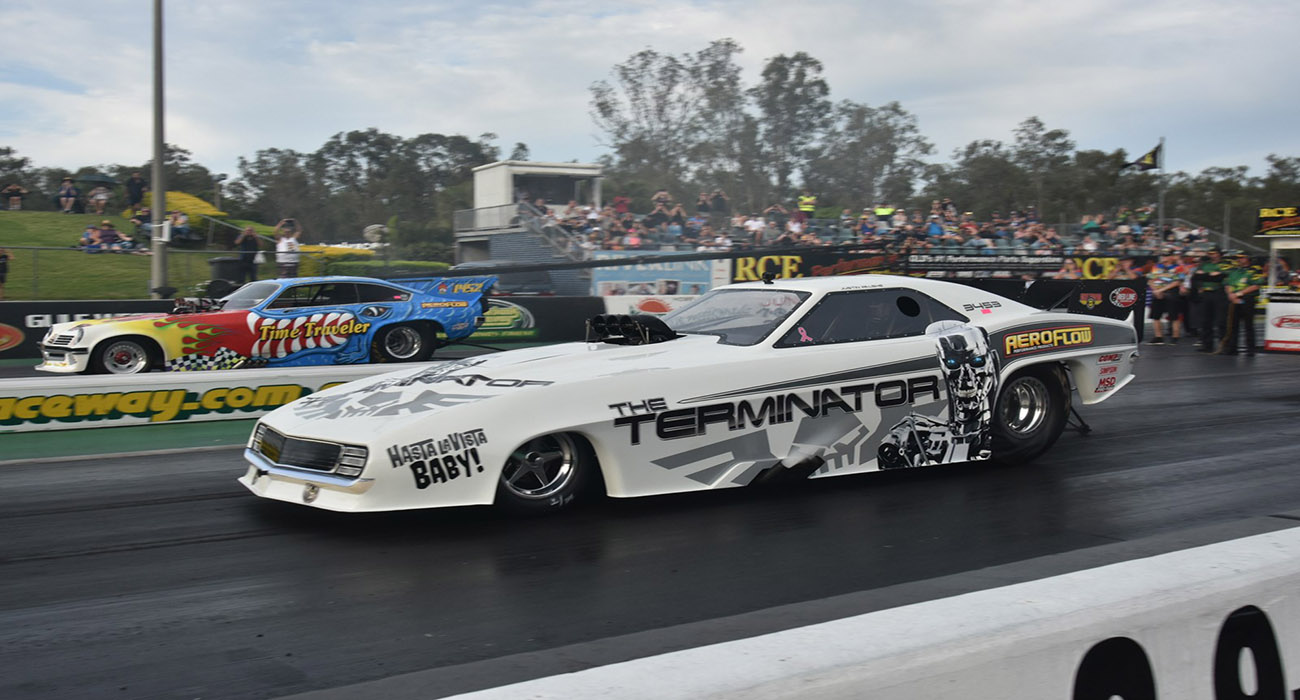 Queensland’s Justin Walshe has been one of the busiest men in Australian drag racing recently, crossing the country to compete at three different venues in three different cars.

Walshe not only drives his own Pro Alcohol altered, but is also a hired gun for the Aeroflow Outlaw Nitro Funny Car Series, where he drives and tunes ‘Terminator’ Funny Car. Throw in a similar gig piloting an Aeroflow Nitro Hot Rod at select events and Walshe’s calendar has become very full.

With the Aeroflow Outlaw Nitro Funny Car Series returning to Willowbank Raceway this Saturday, Walshe is glad to be back on home turf for a change after racing in events at Perth Motorplex, Steel City Dragway in Whyalla (South Australia) and Sydney Dragway.

The white Funny Car known as the ‘The Terminator’ will be Walshe’s thrill ride this Saturday, a nitro-fuelled beast producing about 3000 horsepower and capable of reaching over 400kmh in just under six seconds. Walshe has been given responsibility by team owner and Australian drag racing legend Graeme Cowin to make the tuning calls not just on ‘The Terminator’, but also on ‘Dark Horse’, driven by Sydney’s Paul Messineo.

“The driving is obviously fun but I think the tuning is what I enjoy the most,” Walshe said. “Graeme Cowin is a legend in the sport and he gives me the keys to two of his cars to look after and put my ideas into.

“The workload keeps you stressing but it is good fun.”

Though all of the cars Walshe drives are capable of similar times down the drag strip, he said each one has a quirk that provides variety to his steering.

“It’s hard to pick a favourite as they are all unique,” he said. “The ‘Terminator’ Funny Car I will be driving this weekend is the most fun in the last part of the track because of the big speed it builds up.

“My own Pro Alcohol car is fun in the first part of the track where it does most of its acceleration. But then the ‘Berzerk’ Aeroflow Nitro Hot Rod is the most unpredictable, short and twitchy.

“If you could combined all of them you would have the ultimate race car.”

As busy as Walshe has been, he has still found time to fill out his entry form for the 51st Annual Gulf Western Oil Winternationals at Willowbank Raceway – and with entries closing this Friday, May 11 it wasn’t a moment to soon. Walshe will be competing in the Pro Alcohol category with his own race car, 12 months on from an interrupted debut.

Walshe got back into the seat at Sydney Dragway last weekend where he set a new personal best time of 5.69 seconds, underneath the national record for the Pro Alcohol/Altered class.

“Last year we got all the way through qualifying at the Gulf Western Oil Winternationals only for the weather to end the event,” he said. “We had to go to Sydney last weekend to pick up ‘The Terminator’ so we figured why not take my car down there and do some testing before the Winters?

“The car has so much potential. I’m mean to shift at 9700rpm and I was only shifting at 7700rpm so the car will perform better once the driver is up to the task. I’m looking forward to the challenge of qualifying into a tough field at Willowbank Raceway.”

Fans wanting to meet Walshe and see ‘The Terminator’ up close should make sure they are at Willowbank Raceway at 2.30pm on Saturday, in time for the Aeroflow Outlaw Nitro Funny Cars Pit Party.

“I’m going to take credit for the Pit Party idea,” Walshe laughed. “Most times in the pits the cars are getting worked on and up on their stands. I said let’s bring the cars down to the ground and let everyone get up close and personal. It’s all about the fans getting to interact with these nitro cars right before they are ready to race.”

The Pit Party will finish up at 3.30pm, before the first round of racing commences at 4pm, with further rounds at 6pm and 8pm.

In addition to the Aeroflow Outlaw Nitro Funny Car show, the third round of the Queensland Drag Racing Championship will be running simultaneously, providing an action-packed evening of entertainment.

For more information check out www.willowbankraceway.com.au