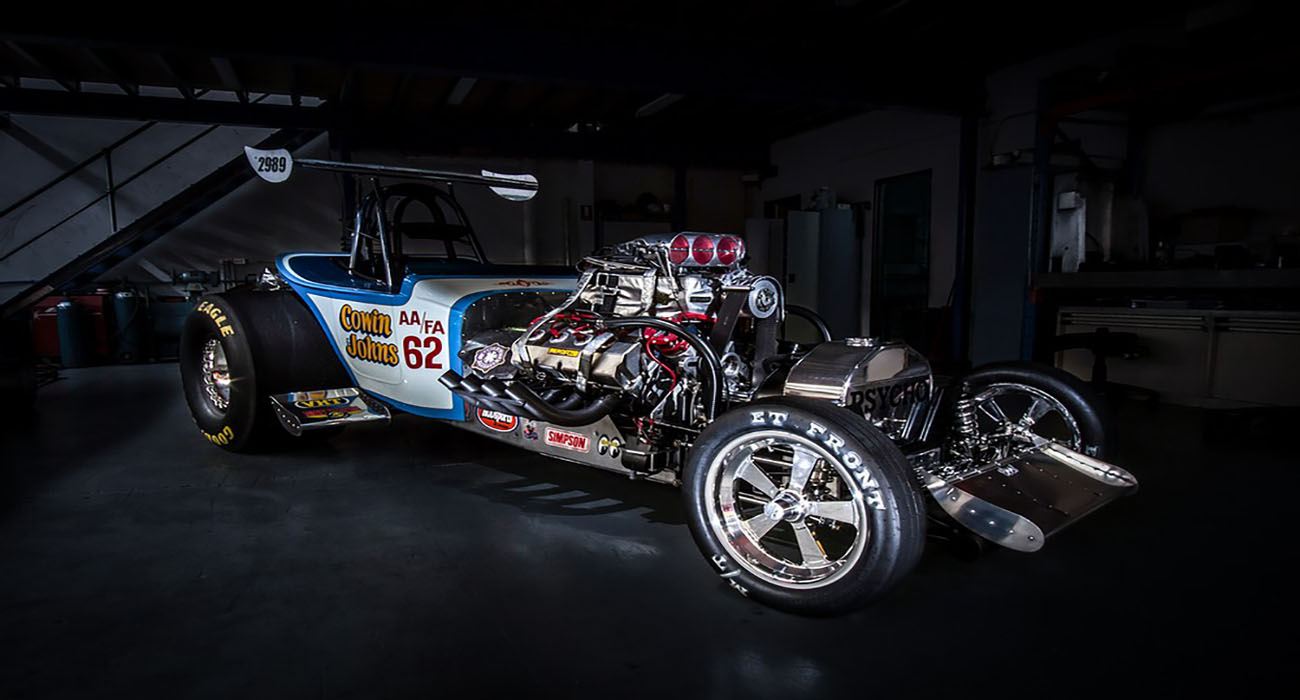 Perth Motorplex will witness a new drag racing spectacle when the Aeroflow Nitro Hot Rods rumble into town on Saturday, March 24, ready to shake the ground with a unique excitement that can’t be matched.

So what is an Aeroflow Nitro Hot Rod? Essentially it is a modern take on a category hardcore drag racing fans know as Fuel Altereds.

Fuel Altereds were the wildest of the wild and their reputation in the sport of drag racing became the stuff of legend. Brave drivers took the nitro-burning motors that were powering the Top Fuel Dragsters and Nitro Funny Cars of the 1970s and put them into short-wheelbase Altered chassis. They handled terribly, were completely overpowered and put their drivers in danger – but the fans loved them.

The class became virtually extinct through the 80s and the 90s but a comeback was fuelled by the burgeoing nostalgia racing scene and there are probably more active Fuel Altered teams around the world now than there have ever been before. Thankfully advances in chassis technology and driver safety have made them much less hazardous, but they remain perhaps the most difficult to drive vehicle in the sport.

One of the original Fuel Altereds in Australia was Psycho III, driven by Graeme Cowin. This car toured the nation, even coming across the Nullarbor to race at the now defunct Ravenswood Raceway. Psycho III was Graeme and Wendy Cowin’s first proper nitro car and the pair sacrificed much to race it – to the point where they had to sell the car to focus on their growing speed shop, now known as Rocket Industries.

“When we built Psycho III in 1 973 we had no money,” Cowin remembered. “I was a truck driver and Wendy was a clerk. We put all our available money into Psycho III and built it out of second hand parts. When I mean all of my money, we didn’t do anything else except build that car. If we wanted to go out somewhere we would go and sit by the water and stuff like that that didn’t require any money.

“It was what we both wanted to do and we had the passion to go drag racing on nitro. We didn’t know what we were doing but we had a ball.

“We loved the car so much that it killed us to get rid of it, we were both literally in tears over it, we felt really bad. But everything turned out to be successful and we worked hard.”

Fast forward a few decades and Graeme wanted to build a replica of the car to take part in ‘cacklefests’, a unique subset of the drag racing world where people rebuild old cars, or replicate them, and then idle them on nitro at car shows, nostalgia drag racing events, or where ever they feel like it.

“We cackled it and it sounded really good, it hurt your hears and stuff, but I said to Wendy, we never did this. There was no cacklefest back then. I wanted to race it.”

Shane Olive is the man entrusted to the driving duties of Psycho III in its modern incarnation. As one of the winningest pilots in the Aeroflow Outlaw Nitro Funny Car Series, Olive is no stranger to fast nitro vehicles, but Psycho III requires a different kind of respect.

“Psycho III is one of the scariest cars to drive, not because of the fact that it is scary to steer as such, but because of the prestige and what it is,” he said. “It has a lot of history with the car, it is a real privilege to drive and you don’t want to scratch it, that is for sure. “I can jump in any of the Funny Cars no problem and drive it, but that car is always daunting.”

Psycho III will take on Chucky’s Toy, Spooky and Berzerk in a three round match race as the Aeroflow Outlaw Nitro Hot Rods take over Perth Motorplex on Saturday, March 24.

The nitro thrills don’t end there with Nitro Mayhem vs Black Widow in a Nitro Dragster shoot out, Beach Bomb vs Nitro Thunder vs No Laughing Matter in Outlaw Nitro Funny Cars and the Nitro Bikes including national champion Mark Drew and hard charger Jay Upton.

For more information on all the racing, times and spectator prices, check out www.motorplex.com.au.