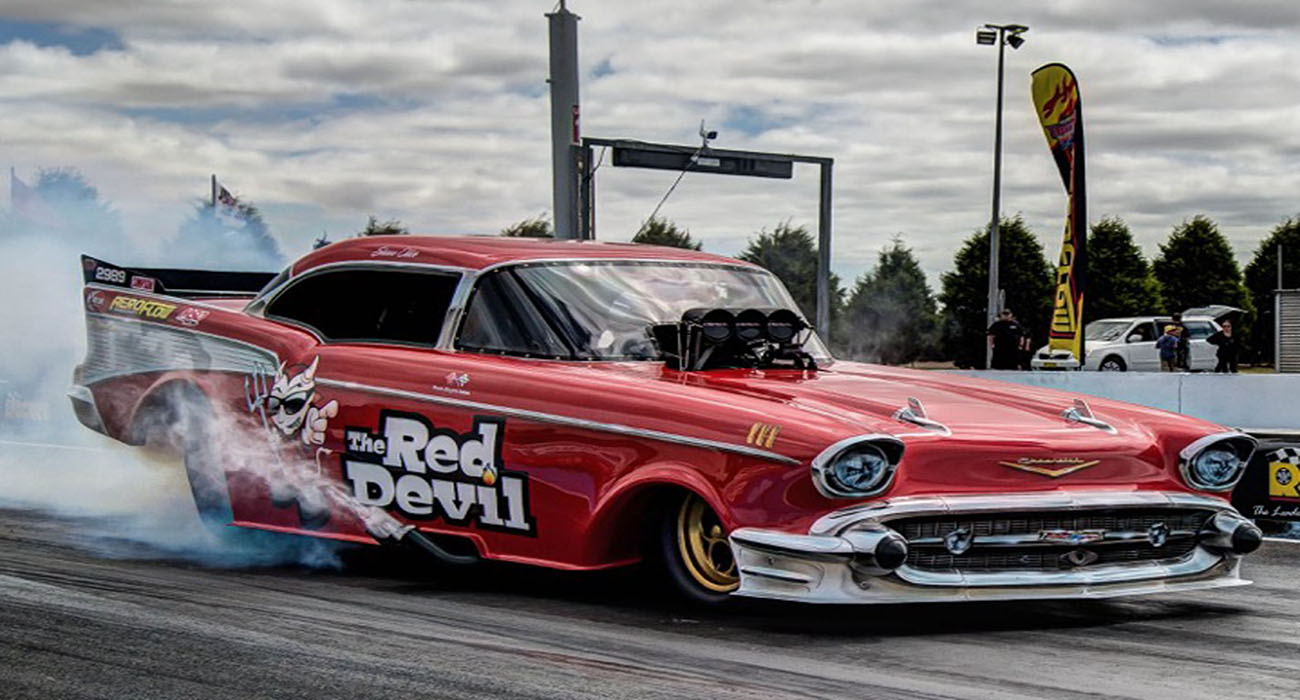 Willowbank Raceway treated fans and racers to the very best weather possible plus ideal track conditions for the eleven Aeroflow Outlaw Nitro Funny Cars and they took full advantage, with screaming passes and close side-by-side racing plus the ever-popular wheelstanders featuring throughout the October 28 event.

Round one started in sunshine and ended in a ‘flames-up’ all-Chev war, with the Red Devil recording a 5.639-second pass and just beating Nitro Express’ 5.680-second run. The Terminator and Justin Walshe took a tight win over the Time Traveler and The Bandit beat One Bad Kiwi in a super-close, side-by-side pass. Paul Messineo’s Dark Horse took the points over Dan Donnelly’s Avenger, whilst brother Jake blasted Bumble Bee to a solid win over a sideways Stormtrooper.

Round one finished with a pair of ’57 Chevs and round two began with a pair of brothers – Dan vs Jake Donnelly. Jake’s Bumble Bee narrowly got the win over Dan’s Avenger, with both cars recording strong 5-second passes. The Bandit then managed to beat Morice McMillin’s One Bad Kiwi and LA Hooker screamed to a 5.753 pass to beat the Dark Horse. Stormtrooper missed round two, so both the Nitro Express ad Time Traveler took round wins in a paired pass.

The most impressive pass of the round might have belonged to Red Devil driven Shane Olive, who managed a 5.602-second pass at a massive 269.35-mph to take the win over The Terminator. That all meant that Red Devil, Bumble Bee, The Bandit and LA Hooker all took the maximum six points to their final round matchups.

Round three picked up right where round two left off. The Peirano-powered Time Traveler ran a solo after Terminator couldn’t front for the final race and the team got the tune-up right with an impressive 6.038-second pass.

Nitro Express then faced off with the Dark Horse and looked set to take the win over but then hit a timing block handing the win to the Mustang. The Bumble Bee ran a staunch 5.746 at 252.47 mph to beat The Bandit.

The event win belonged to Shane Olive and the Red Devil did it with a scintillating 5.498-second pass at a massive 274.61 mph to defeat LA Hooker.

The series now heads west to the Perth Motorplex for December 2, head to www.outlawnitrofunnycars.com.au for more event details.