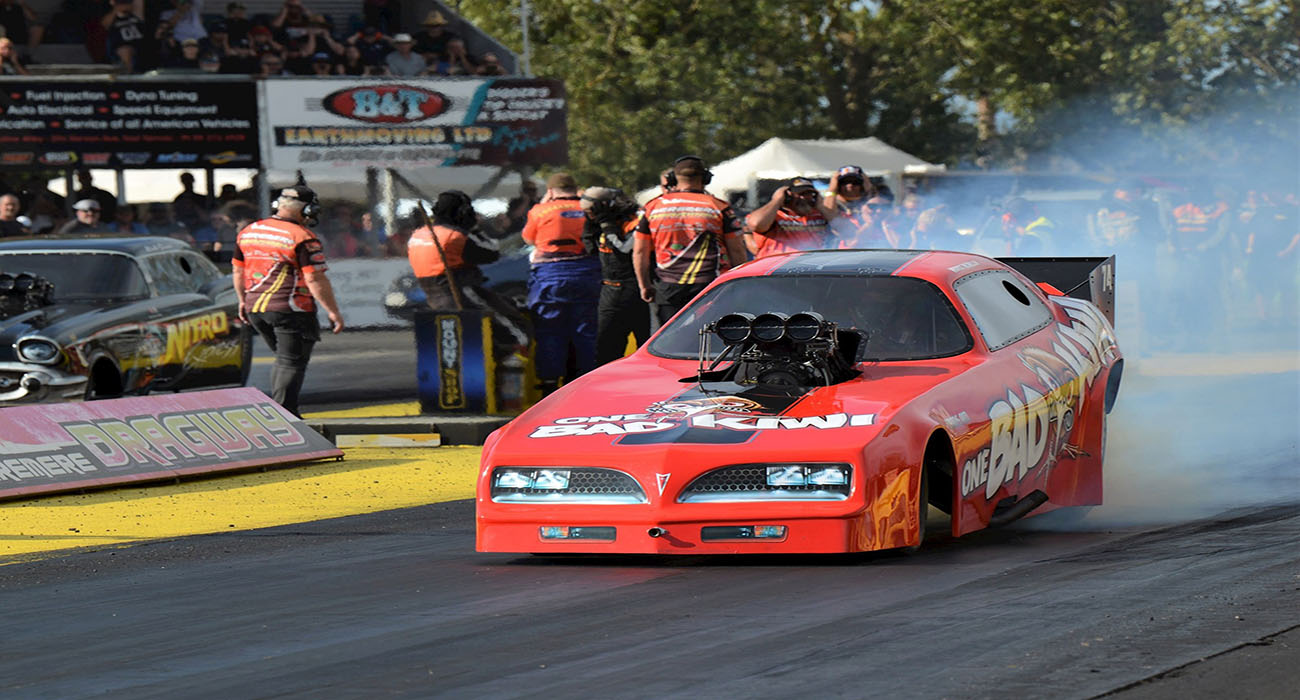 A trio of Kiwis to race at Willowbank on October 28

The Queensland Drag Racing Championship will culminate on October 28 at Willowbank Raceway with the popular series set to feature the wild Aeroflow Outlaw Nitro Funny Cars to add some extra fire to the event!

Amongst the huge field of racers looking for glory in Queensland, a strong New Zealand contingent will be enjoying the sunshine and hopefully, some race wins.

The Kiwi crew will be led by Morice McMillin, who pilots the One Bad Kiwi nitro funny car.

McMillin explained “From a Kiwi perspective, Willowbank Raceway is one of the most iconic tracks in Australia and to compete at this track is something that even as a kid, I always wanted to tick off the bucket list.”

“To have now driven a flame-throwing 4000 horsepower nitro car down the 400m track at over 400km/h is beyond expectations, it’s a dream come true!”

“We have quite a few Kiwis crossing the ditch for the event, so our goal is to get to that top step of the podium holding a gold Rocket Trophy,” smiled the native New Zealander. Another racer making the trip is Pete Stirling who has been peddling his ‘78 Camaro down the Australian racetracks for over 10 years now, having shipped the car over from Nelson, NZ in 2004.

Utilising a nitrous-fed engine combination at the time of the car’s debut, the acquisition of a supercharger saw Pete step up to Supercharged Outlaws in 2012. Stirling currently sits second in QDRC points and he knows he must bring his ‘A’ game to outlast the competition on the 28th. Stirling added, “The racers in Supercharged Outlaws are so tough and these cars are fast and such a handful, you need to be very sharp, nothing is a gift in this class!” The third member of the Kiwi trio is Lee Sherwin who steers the Pro Drill, Ford Escort.

Despite living in Pukekohe, Lee and his dedicated family team fly over to Australia for every QDRC event.

Sherwin told “We want to test ourselves against the very best Australian Super Sedan racers.”

“We are currently sixth in the points going into this last round but with just 17 points covering positions first to sixth, I am very excited for this event as it’s wide open for our Super Sedan Championship.”

“We are pumped to watch too, it’s not every day you get to see a nitro funny car in action, let alone 12 of them at the same time, and being part of the event makes it that much better!” The October 28 round of the QDRC will feature 12 Outlaw Nitro Funny Cars, wheelstanders, a dedicated Kid’s Play Zone and a full field of support classes, this is going to be a fun night of entertainment for the entire family with the nitro cars on track from 3:30pm onwards.