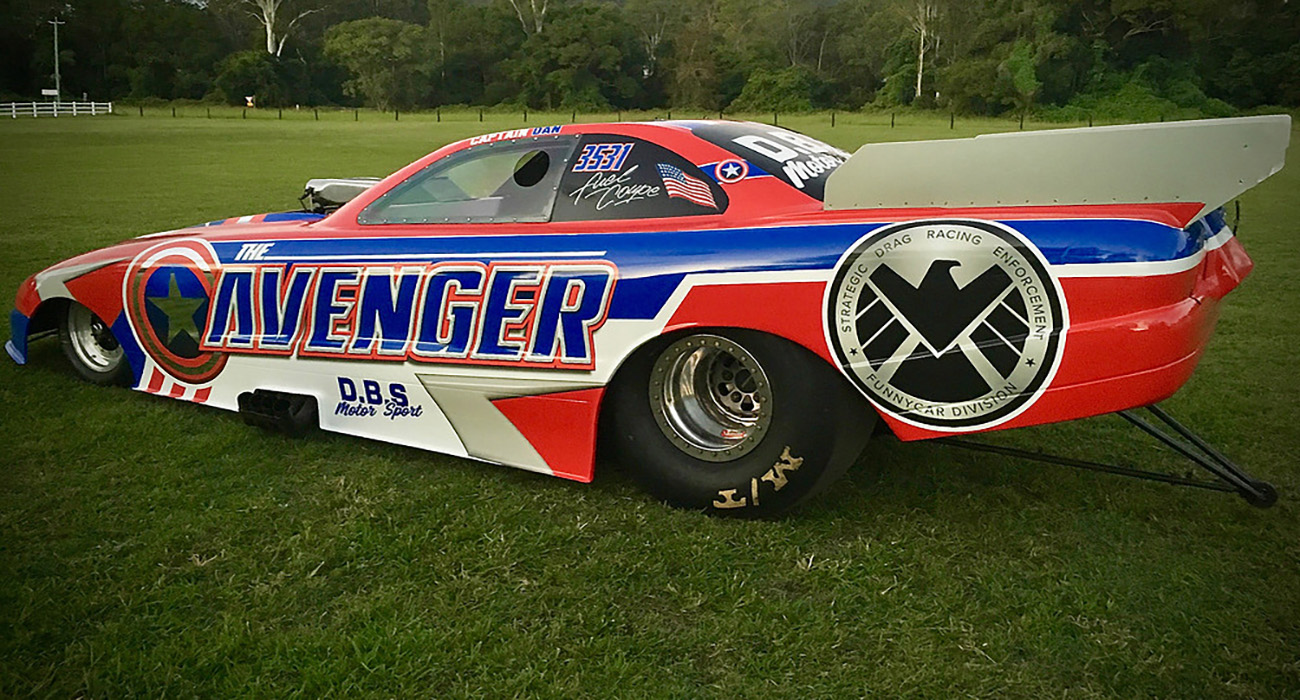 When super heroes get supercharged – Donnelly reveals The Avenger!

The Aeroflow Outlaw Nitro Funny Car Series has a new superstar and supercar! The Donnelly family has today revealed the new addition to the team’s fleet, The Avenger, a new ride for former wheelstander pilot, Dan Donnelly.

The inspiration for the new car comes from the super-hero realm and the newly and aptly named ‘Captain Dan’ is looking for a ‘super-hero’ performance from him and the car during their event debut at Willowbank Raceway on 13 May, 2017.

Dan Donnelly explained, “I have driven the car and I feel really comfortable in the seat.”

“We are not looking to ‘rotate the earth’ but I’m confident that we can put down some competitive passes and maybe even take some wins, particularly if it’s face-off with my brother!

“My aim is simply to do my job as a driver and put on a show for the local Queensland crowd! This is our home track, so it’s the perfect place for The Avenger and I to take on the bad guys! Let’s hope the good guys win!” laughed Dan.

Father and team boss, Jason Donnelly is equally excited, “We have both of our boys in outlaw nitro funny cars, so for Hayley (the boy’s mother and Jason’s wife) and I, this is the realisation of a drag racing dream.”

“The Aeroflow Outlaw Nitro Funny Cars is a tightknit group and having our family-run team fits so well in the pit area.

“We are surrounded by friends, family and nitro – this is as good as it gets! Well maybe a gold rocket trophy would make it perfect!!”

With 14 Aeroflow Outlaw Nitro Funny Cars in attendance, this will be the biggest attendance of nitro cars at the Willowbank event.

Supporting the 14 Aeroflow Outlaw Nitro Funny Cars will be a full round of the Queensland Drag Racing Championship including a field of over 20 Supercharged Outlaw racers!

To keep the kids entertained the event will also feature two flame-throwing wheelstanders, scorching down the entire 400 meter Willowbank Raceway on just their rear wheels, as well as a full kid’s play area including face-painting and bouncy castles!