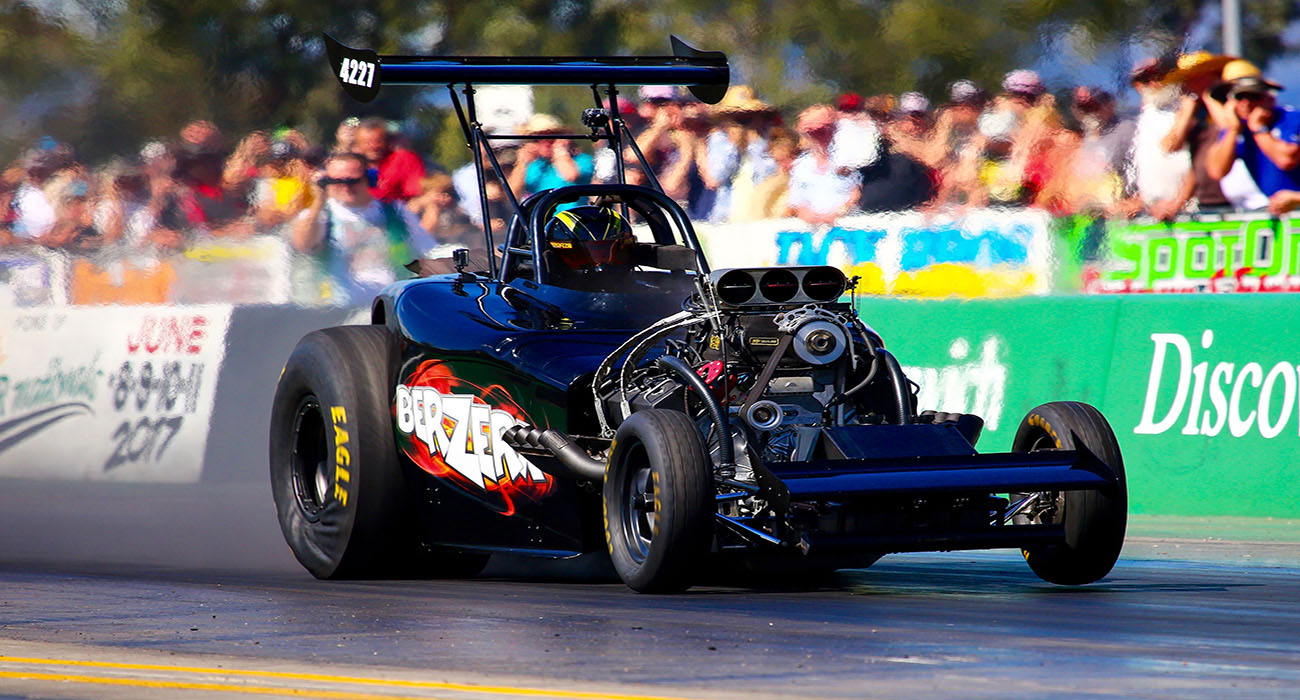 The Trans America Shipping Nostalgia Drags hosted by Bay Rodders was one to remember for the Aeroflow Nitro Hot Rods, with Sydney-based driver Rick Gauci, taking his Berzerk machine to the win over fellow Aeroflow team member, Morice McMillin.

The Meremere Dragway track greeted a big crowd with ideal racing and spectating conditions, after the morning fog lifted, however the teams found traction tough to get in the initial round of racing.

The famous Rat Trap fuel altered from USA took on Australia’s best known equivalent in Psycho, this time piloted by Queenslander, Justin Walshe. Both cars turned the tyres but it was Rat Trap who took first round honours. Gauci aboard Berzerk lost his first-round matchup, with local knowledge helping David Gault get the win light. In the final pairing, McMillin aboard the Spooky Fiat Topolino made the quickest pass of the round and won his race.

Round two saw local boy McMillin open proceedings and get another victory, this time over Rat Trap. Gauci also took a win and Justin Walsh had Psycho all tuned up for his first win light of the event!

The first pass of the final round of the event saw McMillin and Gauci square off aboard Spooky and Berzerk respectively.

Both cars made quick starts but it was Gauci who took the victory with an incredible run, with McMillin brushing the wall en route to the runner-up trophy.

Gauci’s 6.149-second quarter mile pass at 236.84mph proved to be the quickest and fastest of the event.

An elated Gauci explained, “It was great to race here in New Zealand and put on a show for the local fans here at Meremere Dragway!”

“We had a slightly hick-up in the first round but the car was faultless and once we got a ‘read’ on the track, Berzerk went like a steam train.

“Massive thanks to Aeroflow Performance, Graeme and Wendy Cowin, the officials of Meremere Dragway and the Bay Rodders for organising the event. This means a lot!”

The Aeroflow team will next head to Queensland’s Willowbank Raceway for the Aeroflow Outlaw Nitro Funny Cars.