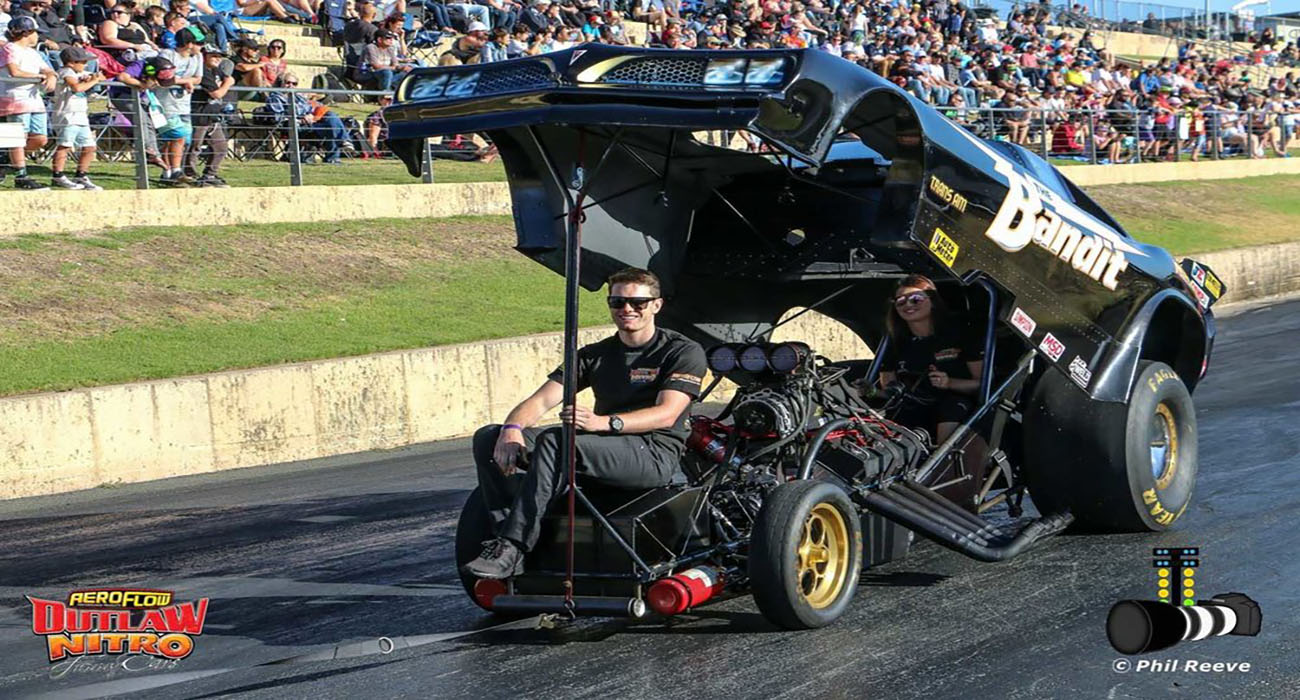 The Aeroflow Outlaw Nitro Funny Car series has returned to the beautiful South Coast Raceway and the 4000 horsepower nitro coupes put on an amazing show for the Victorian fans, culminating in one of the closest final rounds in the series’ history.

The big crowd enjoyed the perfect conditions just as much as the racers, with mid 20-degree temperatures and blue skies a constant over the day.

Round one of racing saw the Nitro Express Chev of Rick Gauci open proceedings with a screaming 3.777-second pass, defeating The Bandit and Josh Leahy. One Bad Kiwi driven by Morice McMillin and WA’s Anthony Begley aboard LA Hooker also took away wins, before Shane Olive in Red Devil rounded out the match-ups with a scintillating 3.769-second pass to record his first round victory.

With the teams getting a good feel for the track conditions, the performances in round two were even stronger with every car but one running in the 3.8-second range! With the scratching of Stormtrooper with a mechanical issue, LA Hooker made it through to the final round on the maximum six points. One Bad Kiwi proved to be just that, as it accounted for Let’s Boogie. The race between the Red Devil and The Bandit was a super-close one, with Josh Leahy and the Bandit taking the win. The last pairing of the round saw Gauci and Nitro Express just get past Messineo’s Dark Horse in another very close finish!

The final round of the day saw the track cool, but the performances did not. Dark Horse beat The Bandit in another close, side-by-side pass. The next pairing pitched the podium contenders, Red Devil and LA Hooker against each other. Both cars made scorching passes and despite a slight early lead, LA Hooker couldn’t hold off Olive and the Red Devil with a 3.704 too much for Begley’s 3.816-second performance.

The final pass of the night had Nitro Express and One Bad Kiwi squaring off, with neither car having a loss en-route to the final. The Nitro Express ’57 Chev took the win and the event, going undefeated over the race meeting.

The loss left McMillin and the One Bad Kiwi car in fourth place, with Olive and Begley in second and third respectively.

The overall winner, Rick Gauci added, “It was a great day and a great event. Hats off to the South Coast Raceway crew, they are so great to work with and we hope we put a great show on for them and the fans.”

“We had the black Chev tuned-up for the final as we knew Morice would be hard to beat. We managed to get the win and that means so much. This series has so many great cars and great drivers, it’s an honour to take home the gold!”

The next event for the Aeroflow Outlaw Nitro Funny Cars will be May 13 at Brisbane’s Willowbank Raceway.