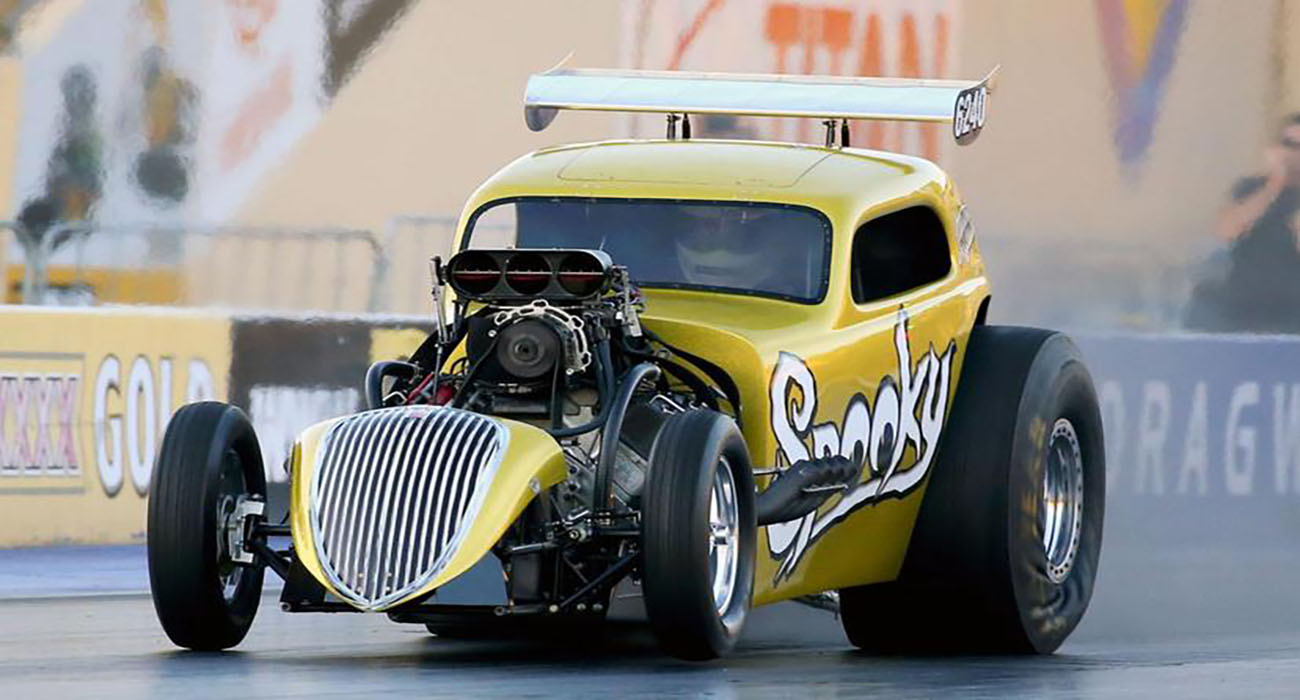 The Spooky Fiat Topolino set the social media world alight last Friday night while making its on track debut at Sydney Dragway. Now the Aeroflow Nitro Hot Rod team has announced the gold Fiat will be making the trip New Zealand for the World Fuel Altered Challenge on April 1 at Meremere Dragway.

Bearing a silver fern and driven by Kiwi Morice McMillin, the short wheel based hot rod will be part of the NZ attack on the historic Trans America Shipping Nostalgia Drags event.

The regular driver of the One Bad Kiwi nitro funny car, McMillin explained “I can’t wait to go back to New Zealand and put on a show for the local fans! I will have friends and family there and being able to take these world class nitro beasts to the local NZ scene is almost a dream come true. It’s a bit strange, a car we have put together in Australia to go race in New Zealand but I’m very grateful to Graeme and Wendy Cowin for making it all happen and letting us represent our home country. Let’s see if we can get the funny cars here next!” smiled the Sydney-based Kiwi.

The new nitro beast will get in one more test session before being loaded to head over the ditch.

“Spooky is just that – SCARY!” smiled the NZ native. “It’s such a small car and cockpit, it feels like a small funny car! It didn’t take too long to get comfortable, as soon as the body came down as it turns out!”

“A lot of work has gone into this car and the results speak for themselves, it’s a stunning car – thanks to Shane, Mick, Timmy, Clinton, Monique and GC – it was a true team effort. The plan was always to get it together for the Trans America Shipping Nostalgia Drags hosted by Bay Rodders Inc. and we have made that deadline with time to spare.”

The Spooky nitro hot rod will be joined by its Cowin stable mates the famous Psycho machine, which will be driven by experienced nitro racer Justine Walshe and Berzerk piloted by Rick Gauci.

The well-credentialed Australian contingent won’t have it all their own way though, with the USA’s Rat trap already in New Zealand.

The Kiwi locals will have three New Zealand cars to cheer for, joining Spooky is Dave Gauld driving his wild nitro coupe and the Lodge/Stables combination making a return with NZ’s own famous nitro altered, Hombre.

McMillin concluded “Meremere Dragway is where I grew up and my crew and are really looking forward to putting on a great show for all our NZ supporters. It was clear this was going to become a huge event and I’m so glad that Graeme and Wendy (Cowin) are as keen to go as we are!”