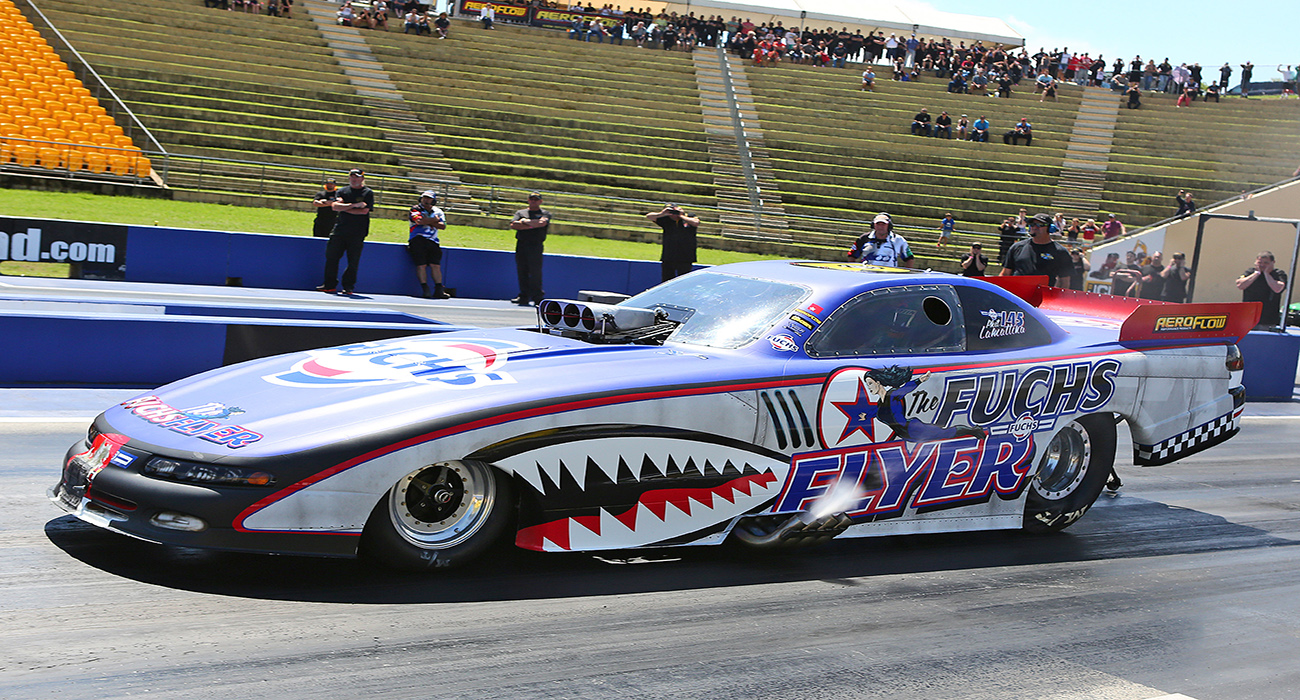 Perth Motorplex played host to one of its largest ever crowds on Saturday night for the Aeroflow Outlaw Nitro Funny Cars.

With 12 nitro burners competing for the win across three rounds, the 10,000-strong audience was treated to some epic racing with Sydney’s Rick Gauci taking the win in the Nitro Express Chev.

The action came thick and fast in round one, with the highlight being a scintillating 5.54 from Gauci – the quickest pass in the history of Aeroflow Outlaw Nitro Funny Cars.

Gauci backed it up in round two with a 5.55 and set himself up for a final round confrontation with debut driver Josh Leahy, who had steered The Bandit to a tough 5.60.

Gauci was simply too consistent in the end and though his 5.59 was vulnerable in the final round, a red light from Leahy ensured that Nitro Express would reign supreme once more.

Gauci paid tribute to his crew chief Graeme Cowin for the performances.

“What a night! GC (Graeme Cowin) had the Chev in the zone and we just ran quick and fast all night,” he said.

“The Perth crowd turned out in droves and we put on a great show for them.”

Paul Messineo, driving Dark Horse, claimed second spot and said the team’s only major troubles involved getting through the crowds to return to the pits.

“It took us half hour just to get back into the pits,” he laughed. “The fans at Perth are so into the action and it just added to the vibe.”

Leahy finished third, while hometown favourite Andrew Katavatis ran a personal best time of 5.74 in a strong showing for the Beach Bomb.

The boys from Drift School WA and D1WA provided some sideways antics during the night, leaving the massive crowd amped.

Throw in all of the local championship action too and it made for one epic night. Winners for the event included Al McClure in Top Comp, Rob Gaikhorst in Super Comp, Phil Paton in Competition Bike, Alan Mahnkoph in Supercharged Outlaws, Mark Grieve in Modified, Ray Le Cocq in Super Sedan, Geoff Smith in Modified Bike, Mike Pearson in Super Street and Beau Higgins in Junior Dragster.

And how about the return of Jay Upton? While he couldn’t get down the track under power, this nitro bike now sounds very, very angry. All images thanks to High Octane Photos.