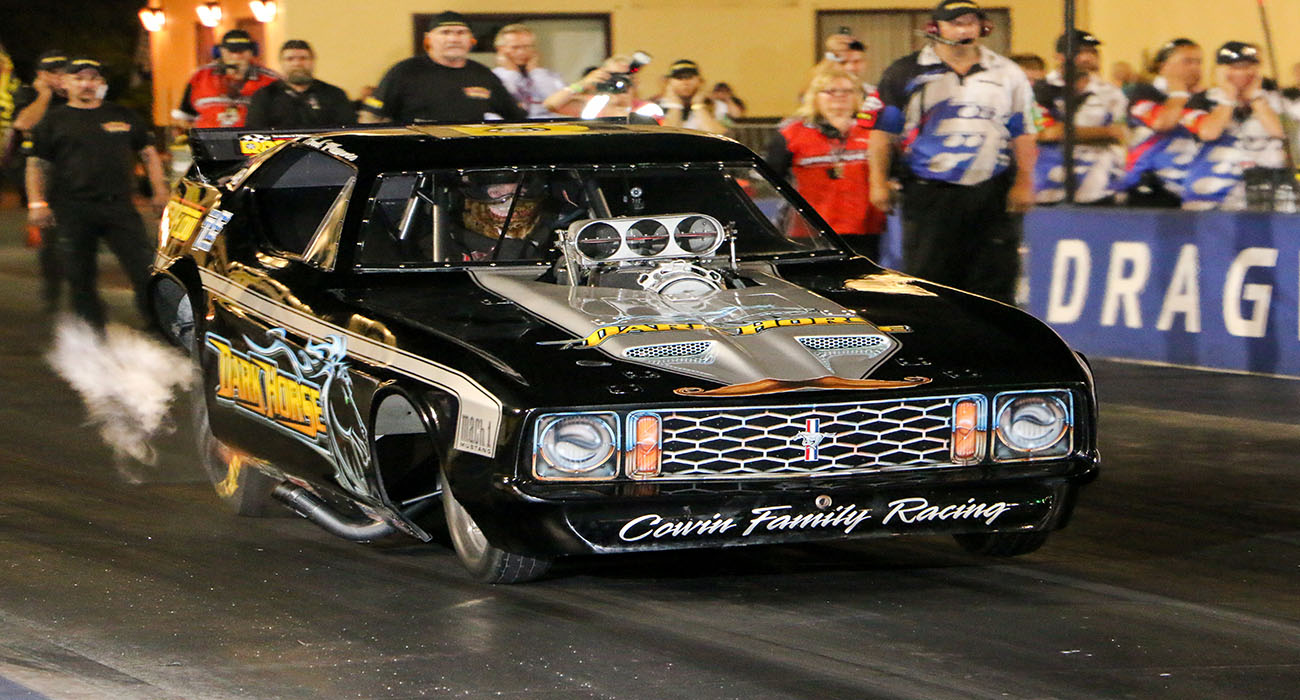 The Aeroflow Outlaw Nitro Funny Car tour has made a stunning debut at Victoria’s Calder Park Raceway with 10 outlaw nitro funny cars putting on a stunning show for the crowd with side-by-side passes throughout the night.

For the Calder Park event, the nitro cars ran over the 1000-foot distance with the ‘fuel coupes’ consistently covering the distance in 4-second zone.

The winner for the event was Queensland-based racer Paul Messineo aboard the Dark Horse, Ford Mustang.

Messineo continued to get quicker and faster throughout the day and after taking the victory in the first two rounds, the Dark Horse scorched down the strip to record a 4.933-second pass in the final round.

Messineo was pumped to record the first win at the iconic Calder Park venue.

“To win at Calder Park is an amazing feeling. I’m so proud of my crew guys, they did a great job, the Dark Horse was just a rocket all weekend!”

“I have to say a huge thanks to Graeme and Wendy Cowin for the opportunity to drive this car, it’s a pleasure and I’m so proud to win this for them and the entire crew that’s supported me.

“I have every trophy now – yeehaaaa!” screamed the man they call the Cowboy!

The runner-up for the event was one of the most likable racers in the pit, Bumble Bee driver Jake Donnelly.

The yellow Camaro was a jet on every pass with the team seemingly having found the sweet-spot for the tune-up of the car.

“This one is for Mum and Dad and the entire DBC Motorsport crew. We al put a lot of effort into this operation and to take three wins out of three is so deserving for the time and effort they put into it! My guys gave me a hot rod and hopefully I did my bit pretty well too!” smiled Donnelly.

Shane Olive and the Red Devil ’57 Chev rounded out the podium with some stout performances, culminating in a 4.833-second pass in the final round win over Let’s Boogie and Justin Walsh.

The quickest pass of the night went to Nitro Express and Rick Gauci with a screaming 4.803 run during the final round of the night for the black Chev.

The series now heads towards Sydney Dragway for the final event of the calendar year, where the Aeroflow Outlaw Nitro Funny Cars are again run in partnership with the APSA series.