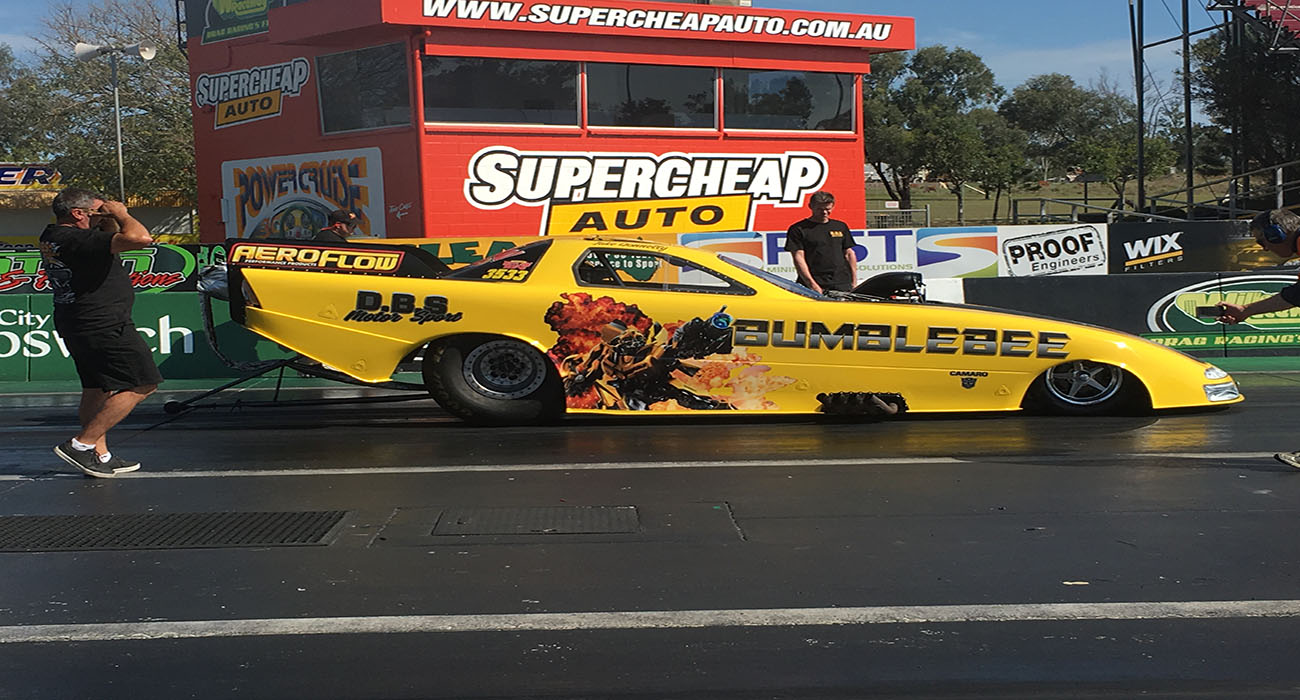 Bumble Bee and Donnelly make it count in Cairns

For Aeroflow Outlaw Nitro Funny Car young-gun Jake Donnelly, the recent meeting in Cairns was a chance to put some recent bad luck behind him and the team and return to the form that launched the likable Queenslander into podium contention from the moment he got behind the wheel of his nitro funny car.

The team had some new changes to their preparation but with a brand new track to contend with it was always going to be the challenge of the first round that decided the direction for the weekend.

“We flew up to Cairns on Friday night with the crew to meet Dad, who had driven up with the other boys in the truck, not really knowing what to expect with a new track,” explained Donnelly.

“We were pleasantly surprised with the facility – it really is top class!” smiled Donnelly.

“I’m always pretty excited to race but the new track and the atmosphere had me even more excited!”

Donnelly felt that the team have gelled and the routine of car preparation in the morning is now precise, organized and the results are coming.

“We drew Greg Leahy in the Storm Trooper for the first round. We have raced Greg in round one for two meetings in a row, which is great as both of ours cars are two of the crowd favourites.

“Greg’s a great racer and our car left well but we started to rattle the tyres on the transition from concrete to asphalt.

“I had a quick pedal (modulated the throttle) and punched top gear to take the win, which was great.

Jake’s quick reaction to the tyre shake meant that the car came back in healthy condition which meant an easier job for the crew when it came time to prepare the car for round two.

“We faced Justin Walshe for the second round and much the same as the first pass, we had a good launch but lost traction on the transition. It was less drastic this time so I made the decision to not pedal and drive on through it. I selected top gear and the car was on a decent pass until I felt the unmistakable rise of rpm and the car up on the tyre around 700ft. The rear of the car began to kick out to the left, another quick slap of the throttle drove it to about 1000 and shut it off, we took the win.”

“Round three of the event was cancelled due to weather but all in all, I really enjoyed the meeting. It’s an awesome track, awesome facility; easily one of my favourite tracks, shame about the weather but racer safety is paramount. We ended up getting third and our first podium!

“I can’t even tell you how much I have wanted one of those rockets (trophies)! I finally feel like we are getting our head around this car, and getting comfortable in Bumble Bee! This series is a badass series by far the most fun racing I have ever done, the crowd and the atmosphere is second to none – it’s a credit to GC and Wendy for what they have created and I couldn’t do it without my family and crew. I just can’t wait for the next Aeroflow round!